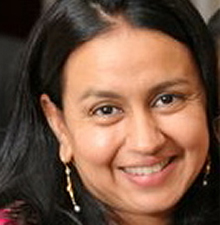 Sabrina Dhawan was born in England, raised in India and lives in New York. She graduated from Columbia University in 2001 with an M.F.A. in Film. Sabrina’s student short film Saanjh—As Night Falls was cited as Best of the Festival at the Palm Springs Film Festival in 2000 and Most Original Film from New Line Cinema, received an Audience Impact Award at Angelus Awards and was nominated for a Student Academy Award–Oscar®. Sabrina’s first produced screenplay, Monsoon Wedding, directed by Mira Nair, was awarded the Golden Lion at the Venice Film Festival in 2002 and nominated for a Golden Globe for best film in a foreign language.

Sabrina’s produced credits include 11.9.01, a short film on September 11th for Canal Plus, and the film Cosmopolitan for PBS. She has co-screenplay credit on Kaminey (directed by Vishal Bharadwaj) and Ishiqiya (directed by Abhishek Chaubey). She served as co-producer on Bollywood Hero, a mini-series for IFC, and as script consultant for Matru Ki Bijlee Ka Mandola. She has written for various studios and film companies in the United States and India, including 20th Century Fox, HBO, Disney Animation, Fox-Star and Killer Films.

Sabrina has taught at Columbia University, Maisha (a lab based in Uganda for East African filmmakers), Sundance Film Lab, Asian American Writing Workshop, Doha Film Institute in Qatar, the Hamptons Film Festival and India Screenwriting Lab. She is an Assistant Professor and the Area Head of Screenwriting at the Goldberg Department of Dramatic Writing at the Tisch School of the Arts, New York University. Sabrina is currently working on a Broadway musical adaptation of the movie Monsoon Wedding and on a feature film for ABC.